A family on the street you grew up. 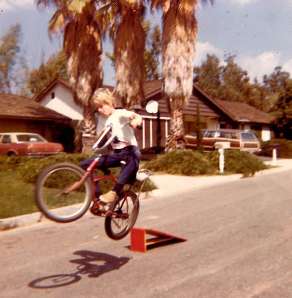 Nike high-top sneakers pounded down the dirt driveway alongside a Huffy bike. It was quickly building speed. Fingers tight around the handlebars and a confidently furrowed brow, a young boy hoped not to lose his grip or fumble in the next few moments. He had an audience of which were analyzing him with the utmost scrutiny this time.

“So what do you think Michael is going to actually do?” Nathan smirked to his two red headed cousins standing next to him with their arms folded. “He’s saying that he’s got some amazing dare devil trick on his bike that this stunt guy ‘Dangerous Dan’ taught him.”

Mariah, the older of the two red headed sisters let out a snort, “No way, he’s always trying to show off!” Aubrey, the younger one, echoed her sister’s retort with a simple but similarly skeptical “Yah, no way!”

The three children stood by the side of the dirt driveway waiting with dismally measurable anticipation at the feat that was about to be displayed by their neighbor Michael Hurgenroder. Although the children leaned toward the critical side, and were far too opinionated for their years, this skepticism was not without merit. Lofty tales of an education in stunts, exaggerations, and unverified claims of black belts were a regular occurrence for the Hugenroder boy. He was constantly trying to one-up, or prove his skills of cunning to the children whose loyalty was predominately motivated by the jumbo size Otter Pops that his father seemed to have an endless supply of.

Speed now at his maximum level, Michael quickly glance over to see if the boy and his two cousins were still watching him, then in a flash jumped up and kicked his foot over his bike, landing his bottom on the seat as it was still rolling. The bike raced to the bottom of the hill then came to a skidding halt as he squeezed his hand brake to create an effect of a dust cloud; A little touch of drama for the end of the show. He whipped his head around to see what he expected would be reactions of awe and amazement from his audience. He was met with three pairs of arms crossed, three confused faces, and each with one eyebrow raised in disapproval.

“All you did was just run and jump onto your bike, Michael.” Mariah said in very blasé tone. “All of us can already do that already… and we can ride our bikes with only one hand too.”

“How do you know Dangerous Dan, Michael? I bet he’s not even real! Let’s call him right now! What’s his phone number?” said Nathan. Aubrey didn’t seem to have much to contribute but was mostly just happy to be included in the group’s playing. “Michael’s lying! Michaels lying! Michaels lying!” was the best she could come up with, and went about repeating it in a sing-song manor throughout the conversation.

Michael shuffled around for a response to the incoming accusations. “Um, well… I don’t have his number. I lost it… while I was riding my bike, in the woods…the piece of paper fell out of my pocket…and, um yah I don’t have it so we can’t call him. But he is real! He teaches me stunts!”

“Right… Michael, don’t be a butthead,” Nathan said, “you don’t have to make this stuff up, just admit it that you don’t know Dangerous Dan and we’ll let it go!”

Michael darted his eyes back and forth between the three children looking for a point of defense. When he could find none, he instead grabbed his handle bars and jerked his bike around to go home, huffing and tisking the whole way.

“Well that was anticlimactic!” said Mariah as the three walked back to their house across the street. At 8 years old she was the most studious one of the group and prided herself on her ever improving vocabulary. Nathan was also 8, but a younger 8 than Mariah. (A point which she emphasized often when determining who should make any leadership type of decisions in the group, and thus would claim the seniority due to her months more of maturity over him.) He was the doer. If any kind of craftsmanship needed to be executed, Nathan was the one who boasted impeccable skills of every form. If you needed a fort built, he was your engineer and contractor. If you needed someone to rule that fort, Mariah was your Chairman Mao. Aubrey at a quaint 5 was a willing minion and subject who was just happy to not be hog tied or left playing an abandoned game of hide and go seek somewhere.

“We should play a joke on Michael!” Mariah giggled to the two. “We should make something up and totally freak him out… like tell him that we got in a car accident!”

“Yah, we could take the sling from when Mariah broke her arm and pretend it was a bad accident,” Nathan added. The momentum in the group was building and plotting a prank was one of the things that this group liked best. “We could get your mom’s make up and have fake black eyes and bruises and cuts and limp over there and tell him we almost died and…” he had to pause to gasp some air in between his stream of ideas which were quickly bubbling to the surface, “we can say one of us got a concussion and pretend like we don’t remember anything!”

Mariah quickly rose to the charge, “That sounds like a great idea Nathan! Aubrey go get mom’s make up. Nathan, you can pretend you got a concussion. I will have a broken arm…and leg. Ok, we’ll eat some lunch then go over there and totally get him!”

Aubrey arrived back with the makeup bag which was full of great colors for creating bruises, being that it was the early 90’s and blue eye shadow was in high demand. Nathan of course claimed to be the best with makeup; not a common point of pride for most 8 year old boys, but he probably saw himself as something like the best makeup architect of his age. He smudged gray and blue eye shadow under Aubrey’s left eye as she chewed her peanut butter and jelly sandwich. He added hints of purple and a Frankenstein style stitch wound in eye liner across her forehead. He knew his precision was uncanny with drawing stitches. Mariah wrapped an ace bandage around her knee and buckled the sling around her arm. She messed her curly red hair up and smudged some red lipstick on her cheek to look like it had a bloody cut. Nathan found an old piping tube in the garage to pose as a crutch and drew a few stitches on his arm and cheek then blacked out one of his front teeth with a marker.

They were immensely proud of the outcome. Their disheveled and marred appearance would no doubt fool Michael Hurgenroder and pull off the best prank ever, they thought. The three then set off stumbling down the driveway to the Hurgenroder yard.

“AAAHHH! Help us! We are hurt so badly!” Mariah bellowed.

“I can’t feel my left eye ball! Oh no! I’m bleeding! Where am I?” Nathan yelped

Michael opened up his screen door to the sorry looking bunch. “What happened to you guys?” he said. Nathan proceeded to tell the tale of the epic car crash they had just experienced, how they all almost died, and that they needed to go to the hospital right away. (They didn’t seem to put two and two together and notice that they were already in possession of bandages, stitches, and had already formed bruises within a time span of a few moments…deeming a hospital visit completely unnecessary… but as it was stated before, kids are dumb.)

Michael’s face looked panicked for a brief moment, until he stepped outside and looked closer at the smudged stitch marks on Aubrey’s forehead, no doubt from scratching a very necessary itch. “Are you guys wearing makeup? Yah… it just looks like you have Zombie makeup on or something. Why do you have blue and purple stuff all over you?”

They tried to stay in character and hoped that their fervor would convince his doubt. “Our car rolled like 8 times! Michael you need to call 911…uuugghhhaaahhhh Ouch!”

“Um, I’m pretty sure that is not real. I don’t really get what is going on here… are you guys done?” he shrugged.

They had been defeated. Michael “I have a black belt in karate but it’s coming in the mail” Hurgenroder had not fallen for their plan. Embarrassed, they started to shuffle home, bandages trailing behind them and conversations brewing new and cleverer methods for future deceptions. They had thought for sure this plan would work and that Michael would look like a fool caring for their wounds and frantically trying to save their lives, but that day, the only injuries were to their prides.